When she was only 15, Greta Thunberg talked on CNN to Fareed Zakaria. She also issued climate change warnings at Davos, the World Economic Forum.

RELATED Why this Western Media Obsession with “Joshua” Wong and the Exodus of China?

Euronews: “Greta Thunberg, the teenage activist fighting for the environment.” And this: “At 16, Greta is leading a youth movement calling for action to prevent climate change.”

But is she real, or is she the hype of the unhinged media creating, in concert, a new messiah figure that suits their global narrative? After all, the climate cannot be changed and, besides, how can anybody not cheer environmental protection and less pollution?

Also, Greta’s core message is simply ‘fake news’. In her TED talk, for example, the alleges that nobody in politics cares about changing the world for the better, which in reality of course many leaders do care, as the Kyoto Protocol or the Paris Agreement show.

“We want politicians to listen to scientists,” she says. But they do and, by the way, … move out of the picture and make some space some real scientists. See the elephant problem here?

Don’t get us wrong. Greta obviously has people’s skills and can speak in front of cameras and audiences. She’s a public magnet.

However, remember the proportions. We have a situation here where a garrulous youngster was picked to represent all young people who may have nothing to do with Thunberg. It’s quite patronizing to say “she is the leader” of all those students. Which leads us to think that we are witnessing a global sentiment that is both shallow and false, and shows how wicked our mass media can be in depicting false leaders [and villains].

The German regime press Die Zeit immediately urged parents to join their kids: “Parents and teachers have to join!” I guess the practical impact of all this religious journalism perhaps is that hundreds of thousands of kids get a day off in school, thus disrupting the system.

“We are fighting for everyone’s future,” Greta explains. Great. And empty. What they learn in school is evidently brainwash and what they march for is what everybody agrees on.

Newsweek, what’s that propaganda crap on your site?! 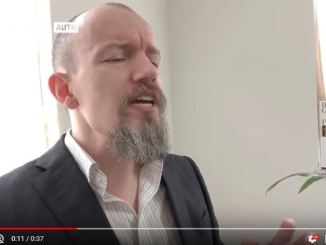