The East-West dichotomy is a philosophical concept of ancient origin which claims that the two cultural hemispheres, East and West, developed diametrically opposed, one from the particular to the universal and the other from the universal to the particular; the East is more inductive while the West is more deductive. Together they form an equilibrium. 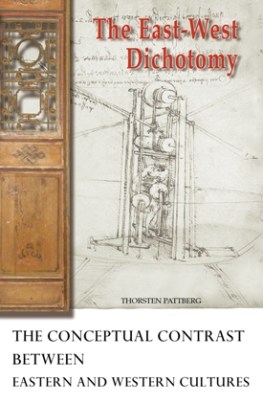 Read what world leading scholars say about this book [from the back cover]:

TU Weiming (Harvard University): “The difference between the East and the West has been a fascinating subject for comparative studies. In a thought-provoking and pioneering attempt, Mr. Pattberg illustrates a few highly significant philological and philosophical issues in the history of the two great cultural systems – when they harmonize and when the clash. This is a tour de force that should excite interest in a wide readership.”

Daniel A. Bell (Tsinghua University): “An intriguing and historically informed work on the origin, evolution, and justifiability of the dichotomy between East and West.”

GU Zhengkun (Peking University): “I have read The East-West Dichotomy with amazement and an impulse to recommend it to everyone I meet. It is the most interesting and insightful exploration of the East-West cultural differences. The author indeed has done a magnificent and extremely important job in the field of comparative culture.”

Rajiv Malhtora, Author of ‘Being Different’: “This book is an important contribution to the East/West debate, which is critical and urgent in the radical shifts under way. While the West has dominated the discourse on the history and philosophy of civilizations for the past few centuries, the earlier domination by Asia is in the process of returning on the world stage. Pattberg’s contribution deserves a seat at the table of this conversation.”

Chandra Muzaffar (University of Science, Malaysia): “As global economic and political power shifts from the West to the East, it is so important for intellectuals everywhere to develop a profound appreciation of some of the underlying philosophical and cultural currents that may shape the emerging universal civilization. Thorsten Pattberg’s book offers extremely useful insights that are not readily available elsewhere.”

Iain McGilchrist, Author of ‘The Master and his Emissary’: “A highly original and stimulating take on East-West cultural differences. Though impressionistic and controversial in its style, it is a lively and thought-provoking book, full of material that was new to me. In particular it will intrigue those who are interested in attentional and cognitive differences between Westerners and Far Eastern peoples.”

The dichotomy resembles poise and counterpoise in nature and, by extension, humanity’s innate tendency for cognitive dualism – embodied by the two hemispheres of our brain - and the necessity for planetary shared labor of the human species. The text has been around since 2006, first published in essay form in Edinburgh, Scotland; in 2008 put online; and, finally, published as monograph in New York in August 2009. It has since then been viewed or downloaded over 300,000 times (stand 08/2013), inspired countless bloggers, writers, scholars, and artists, and making it one of the most read online texts in Asia Studies today.

In November 2013, The East-West Dichotomy has been republished in Beijing by China’s distinguished Foreign Language Press - readied for global distribution. Its concise chapters are composed of individual reflections of world historians and great thinkers from Plato to Mao Zedong, from the Duke of Zhou to Einstein, from the Buddha over Hegel to Tagore, and hundreds more. It deals with cultural differences and how those differences play out, crash or harmonize, in such diverse fields as ideology, politics, philosophy, religion, psychology, language, gender, strategic thinking, and even attitudes toward life and nature.

Cultural pluralism has become almost a taboo in our age of total Westernization, English language dominance, and countless Western universals like democracy or human rights intimidating the Eastern spirit. That’s why critics have called the Dichotomy an “anti-Western” book. It ministers to one of the most significant questions of our age: Is there anything Eastern cultures could contribute to Globalism and World history; and if so, how? The Dichotomy offers some surprising answers, but also makes bold new predictions, with room for speculation in a free and open debate about the future of Culture. The Dichotomy is essential reading for anybody who has one – a culture; and for those who want one. But above all it is for those who want to explore the profound cultural differences between East and West. This is a timeless book. This is an influence.

Thorsten Pattberg is a German philologist, scholar, and cultural critic. He is a former research fellow at Tokyo University, Harvard University, and Peking University, and the author of four monographs and over fifty influential articles on Chinese Western comparative studies.

The East-West dichotomy is a manifesto that was first published as crude manuscript in 2009 and has since spread through the internet and has attracted over 293,000 unique visitors on this website alone. It deals with the conceptual contrast between Eastern and Western cultures and is now one of the most widely read texts in Asian Studies today. The Foreign Language Press in Beijing is going to publish a new edition in March 2013.

# Featuring defining and thought-provoking chapters on:

* History
* Induction & deduction
* Asia-centrism
* Equilibrium
* Demography & Migration
* Cultural effects of the dichotomy
* Two successful models
* Two incommensurable realities
* The theory of power and to whom it belongs
* The problem of standard
* A loveless Darwinian desert
* The psychology of communion
* The problem with Nature
* Ideology, Gender and many more…

# Including over 345 references and hundreds of quotes from historical personalities

# Becoming the standard work on the East-West discourse

You may quote from this website by using the book’s reference:

Pattberg.org © 2009-2018. The East-West Dichotomy, Shengren – Above Philosophy and Beyond Religion, Inside Peking University, EURO-TAO, End of Translation, Lingualism, Knowledge is a Polyglot, Vocabulary Wars, Press Soldiers and all associated characters, products, videos, images from Pattberg.org are either TM and/or © Pattberg.org/LOD Productions, New York. Contents at www.pattberg.org may be used and shared under fair use, citing the source. All rights reserved. All other trademarks, logos, images, and copyrights are the property of their respective owners.