“What if 70 news organizations had decided to warn against voting us,” the chair woman of the Christian Democratic Union, Annegret Kramp-Karrenbauer, lectured her party minions: “That would be called election meddling!”

But not 70 news organizations had decided to warn against voting her atrocious party - No! it was 70 Youtubers!

You read this correctly. The Merkel Party - Angela Merkel is still Chancellor, rounding up 16 years as solemn dictator - has lost in national as well as in EU elections and now blames a group of Youtubers!

Not just that, it compares single Youtubers to the power of entire news organisations. Is that woman out of touch or what? It gets better.

It gets better, because that is were the flattery ends. Annegret Kramp-Karrenbauer calls for censorship - she calls it regulations, of course - of the Internet before and during elections.

This woman is clearly morally retarded and should go back to press the school bench over the German Basic Law Article One: There is no Censorship.

I’m joking of course. The Party gives a fuck about freedom of speech and already censors the Internet in the cruelest ways, through upload filters, moderations, and copyright policing madness.

This evasive form of censorship is culminated in the now infamous Article 13 of the EU law on the regulation of intellectual copyright. It basically makes it impossible for citizens to criticize their rulers because the rulers own the copyright on their material.

Germany and the EU are in effect censoring as hard as China or Russia.

No wonder that Youtubers, Youtube being a US company were freedom of speech is taken for granted, go wild over the infringement on their God-given human right to speak up to those in power.

So now the Party wants to crack down on those Youtubers some more. Youtubers have just too much influence, sorry.

And crack down on them they will -one way or the other. Already, the regime press singled out those Youtubers whom to give a leg up who support the regime -mild critique allowed. The rest of Youtubers get blacked out, harassed, copy-striked, or a visit from the thought police.

Germany has extremely strict ‘hate speech laws’ that allow their rulers to persecute anyone who offends them.

German elites have fucked up. They are out of touch with the Poebel -the non-notables, the dirty people. Annegret Kramp-Karrenbauer must never become the next Chancellor. These corrupt, despicable, clueless tyrants want us to shut up!

What do you think Germany is heading towards? Don’t be shy and leave a comment. 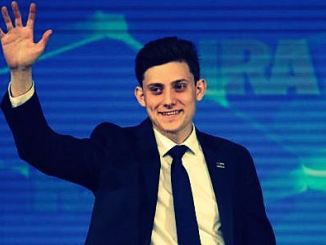