These are shocking images and disturbing footage. Angela Merkel, supreme leader of Germany, had a physical collapse. I link the video by Tim Kellner in the description below. I can’t show it here because of copyright and censorship issues. The regime obviously doesn’t want to public to know.

Xinhua.net, a Chinese broadcaster, described it the following, quote: “At the ceremony with military honors for Zelensky, the 64-year-old Merkel began shaking all over her body while the German anthem was being played.”

It is hard to watch. Merkel shakes, her whole body twitches, shivers, like a spasm. RT called it “a violent shaking.” She is close to a breakdown but somehow managed to go through with it. You can’t help feeling uncomfortable watching the process.

Is she a medicament abuser? Withdraw effects? Is she neurologically ill? And, why aren’t those images in the German news? Only foreign media, mostly Britain, China, and Russia were all over it.

The mental and physical health of our dear leaders are well-kept secrets. The regime merely commented it was a dehydration problem and that Merkel lacked water that day. What a sham excuse.

This nervous collapse was real, in front of the national anthem. Angela Merkel had a spastic collapse.

So Happy* To See Hong Kong Become A Part Of China

America is suing German companies (and we can’t retaliate) 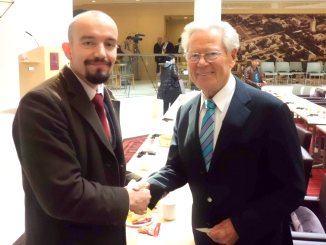 The Küng of Global (Business) Ethic