Have you ever had over 200,000 fans and were forbidden to talk to them? Well, Twitter disconnects fans from their feeders all the time.

The social media platform recently banned Alex Jones (for 4 weeks, it is rumored), and now has eliminated Gavin McInnes indefinitely from using its services. The crime of Alex Jones and Gavin McInnes? Incitement to hatred. A vague term, and precisely so for getting rid of unwanted influencers.

In this interview, Ezra Levant from Rebel Media (in Canada) notes that four of his most prominent former starlets, Gavin McInnes among them, the others being Tommy Robinson, Lauren Southern and Faith Goldy, are all being digitally erased from the Internet. He urges Gavin McInnes to fight back against Twitter with a law suit because he has the means and resources to do so. Even if success is on odds, the moderator reckons, it would “smoke out” some of Twitters internal decision makers. To which McInnes replied that he is ready to embrace lawfare: “We are targets, not victims” and “we must fight back.” 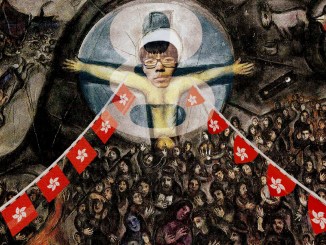 The British Guardian, “Joshua” Wong, and the Jewish Conspiracy